Growing up I watched a ton of animé. It gave me a lot to daydream about during my teenage years which translated into cringey fanfiction I shared and sometimes wrote with my friends. As I grew older, I began leaning towards Japanese dramas, occasionally watching a new animé if one piques my interest.

While I now jump back and forth between animé and dramas, I realized that there are four animés I always go back to if I need a pick-me-up. No matter how many times I rewatch them, it never gets old. So, here are my four animés that I’ll be watching even when I turn 80 years old (if I even get that far.)

As I’m writing this, I’m listening to one its soundtrack which I definitely recommend.

I forgot how I got introduced to this animé. The earliest memory I have of this is replaying a song from an episode over and over on an outdated computer since I had no mp3. I don’t think the first iPod was even invented yet.

Prince of Tennis is a sports animé focusing on a young tennis prodigy, Echizen Ryoma. At first, his incredible tennis skills are a copy of his father, Echizen Nanjirou, a tennis professional who was at the peak of his sports career before retiring due to having a child. The animé follows Ryoma’s journey to surpass his father and develop his own style of tennis while leading his junior high school team to the nationals.

It sounds like the animé is heavily centred around him. However, it’s quite the opposite. Unity, friendship, and healthy rival relationships are central themes in the animé, and it not only helps Ryoma grow as an individual and as a player but also the other characters too. The author did a great job of fleshing out character personalities while making them fun, relatable, and distinct. You come to love all the teams, not just the main one.

What I love most about Prince of Tennis is that it’s also a slice of life. You get to see character bonding and dynamic outside of their club activities, a factor that I don’t see very often with other sports animés. One of my recent blog posts briefly discusses Prince of Tennis as an example to what makes a sports animé good or bad.

Every few years I find myself rewatching the first season which is over 170 episodes. I’m currently rewatching it now. I never get tired of it: the characters, matches, and the fun filler episodes. It’s definitely an animé I can see myself watching when I’m old and laughing and cheering for my favourite characters like I did when I was a teenager.

Ghost Hunt focuses on a supernatural investigation team who looks into paranormal cases. The cases can get eerie, and I remember being too scared to sleep at night after watching “The Blood-Stained Labyrinth” arc.

The best factors about Ghost Hunt lies not only in its cases but also the team dynamic and personalities. Just recently I rewatched the series, still disappointed that there will be no second season as the characters have just grown on me. This animé is only 25 episodes which you can finish in about a day if you binge.

Detective Conan is primarily a mystery animé. It revolves around a high school student, Kudo Shinichi, who shrinks back to his elementary self by “The Black Organization” after he witnesses one of their shady drug transactions. Since then, he’s been working to permanently get back to his high school self while solving crimes along the way. 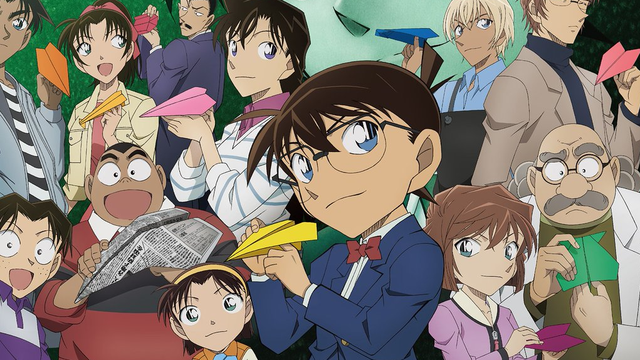 I’m pretty sure most of you have heard of this. Again, I have no idea when or how I got introduced to this. Before I was aware, I fell into a routine of checking for weekly episodes and rewatching old ones. I find it strange how I never get bored even if I know exactly how the murder is carried out and who the murder is.

While there are tons and tons of filler episodes, I find most of them enjoyable. Some murders are a bit ridiculous, but the characters are great, especially the Detective Boys. The episodes where they’re involved are usually the ones I enjoy the most.

If you don’t mind tons of filler episodes with arguably interesting cases, I’d recommend this one. Currently, there are over 900 episodes. I don’t think it’s going to end anytime soon. Maybe when I’m in my 50s, it’ll still be going with every character still their age. Regardless, I’ll likely still be watching it.

An animé that’s similar to Detective Conan but with a slightly different concept. It focuses on Kindaichi Hajime, a genius high school detective who’s not-so-great at academics unlike his childhood friend, Miyuki. The series simply follows the cases he solves.

I haven’t watched the entire animé series. I have, however, watched all of the live action. From seasons 1-3, including the latest one with Yamada Ryosuke, I’ve watched at least twice. I’ve also watched its movies and specials (at least twice). The difference between Kindaichi and Conan are its case depth. While the murder motives in Conan can be shallow, Kindaichi cases can be quite emotional, especially in season one.

What initially drove me to this series was that it was another murder mystery and primary actors and actresses in the live action films. The cases are interesting with methods slightly more realistic and motives arguably more acceptable compared to Conan.

If you’re a murder mystery lover, I’d highly recommend giving this a shot regardless if its the animé or the live action. As Kindaichi is an older show, you’ll recognize big names such as Matsumoto Jun and Yamada Yu back in their twenties or late teens.

Some other animé I watched during my childhood was Inuyasha, Card Captor Sakura, Naruto, and Fruits Basket. Those four were the most notable ones.

I still remember my sister had the Sakura cards. But after I played with them, they got lost somewhere… whoops. I was heavily into Naruto, having finished a horribly written fanfiction sometime in my early teens on a giant man-eating sushi at one point.

Let me know what were some of your favourite childhood animés!

A coffee and tea enthusiast who’s always looking for a cat to cuddle. View all posts by Annie