Final Cut tells the story of Hayakawa Keisuke (Kamenashi Kazuya) seeking revenge upon those responsible for his mother’s suicide. Twelve years ago, Keisuke’s mother was falsely accused of murdering a child thus ultimately ending her life. He gets involved with the media outlet that covered the story and two sisters whose brother has a connection to the murder. 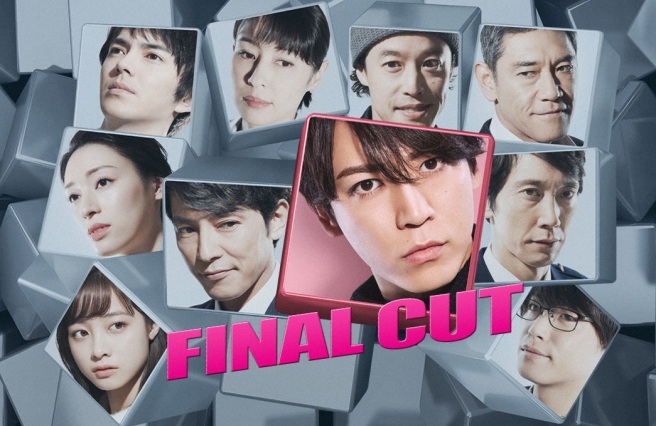 This review is not spoiler free.

It’s a mediocre Japanese drama that aims to mix romance with suspense and mystery. Each episode focuses on a character and Keisuke’s revenge. From the start, he exposes and essentially blackmails media personnel with help from Daichi (Takaki Yuya), a computer genius who I’m still not sure how they came to be working together or what their relationship is.

Each one of Keisuke’s victims is physically presented with a website with a video that plays onscreen of their sins and dirty deeds. Eventually, they decide to retaliate by secretly investigating Keisuke while covering other media affairs.

This is your final cut.

From episode one, Keisuke is also involved with two sisters. He takes on two different identities and meets them to what they know of him. For example, Ogawara Yukiko (Kuriyama Chiaki)–the older sister–meets Keisuke at an art museum where he presented himself as a teacher while to Ogawara Wakaba (Hashimoto Kanna)–the younger sister–he takes on a different identity.

While it’s not explained on how Keisuke comes to the conclusion that the family is involved with the murder, he ultimately comes to fall for the older sister. She initially covers for him after he gets caught by both sisters which leave Keisuke confused as to the reason behind her actions. However, when they meet again, he exposes his real identity and tells her that her brother is the murderer in the child kidnapping case twelve years ago.

The first half of the series is extremely focused on Keisuke’s revenge and the heartbreak of losing his mother. In the beginning, the sisters ‘side plot’ is a nice touch. However, halfway through, it shifts gears and now focuses on Keisuke’s budding romance with Yukiko which takes away or extremely downplays the mystery and suspense built up from the beginning.

The biggest pro about Final Cut is its cast. You have big names such as Kamenashi Kazuya, Takaki Yuya, and Fujiki Naohito. The story is alright, nothing too exciting.

Check out episode one here!