Tokyo is going to be hosting the 2020 Summer Olympics. Therefore, housing sales in the area have become fiercely competitive. A real estate company in Tokyo has recently been assigned a new chief, Sangenya Machi (Kitagawa Keiko), a beautiful woman that gets involved with her clients’ problems with the goal of purchasing homes from her.

Each episode focuses on the team’s efforts to make a sale. 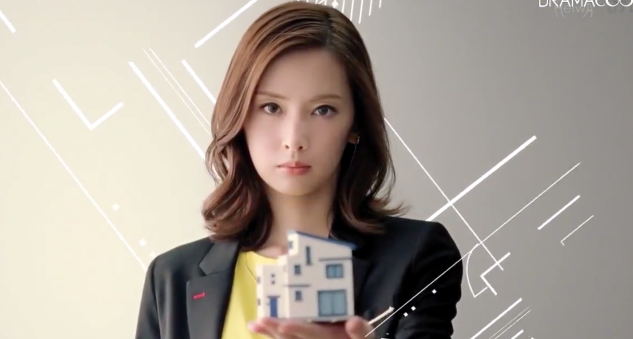 This review is spoiler-free.

While a strong character, her facial expressions are exaggerated. She rarely smiles and always looks like she’s ready to fight someone. To say the least, it’s offputting and strange if you meet someone like that in real life (though, some may consider it a quirk.)

Yet, she is extremely goal oriented, paying no attention or mind to other affairs. However, she does not understand the concept of teamwork.

She also doesn’t mince words: she embarrasses her new team members the first day she meets them by actively voicing their sales. To say the least, the entire company is intimidated by her from the first episode.

On the field, she’s extremely prepared and observant of her clients’ characteristics. She plays them well to get her goal. I like this quote from her: “They [real estate agents] utilize back roads no one knows about rather than the main streets.” It’s very symbolic of her personality and directly contrasts her character from Niwano who is the receiver of this quote.

The complete opposite of Sangenya Machi, he isn’t much of a risk-taker and hopes for the compliance of his clients. Ultimately, he ends up losing at his own game.

Sangenya also uses him to please the clients. In other words, Sangenya is the brains and Niwano do the heavy duty. Their work combination is hilariously spot-on.

Like everyone else in the company, Niwano believes Sangenya’s antics are sometimes too much but has neither the courage or heart to go against her. Despite Niwano’s incapabilities, he’s an endearing character and a kid at heart.

Also known as “Prince Adachi”, he knows how to play to his strengths. At first glance, he seems innocent as he’s young and has a cute face, but is also a goal-oriented character.

Being the target of Mika’s affections, he avoids her antics and has no intention of reciprocating her feelings. While he is not as extreme as Sangenya, Adachi is one out of the few characters who is aware of his responsibilities and has the capability. Yet, he starts to feel threatened by Sangenya’s presence.

To say the least, he is a relaxed boss, too relaxed that his company has been underperforming in sales. He stands up for and encourages Shirasu Mika. Yet, he fails to give proper advice on how to fix problems. While not very fond of Sangenya in the beginning, he begins to realize her many charms.

Every drama has a personality like her: the comic relief character made to bring laughs and diversion away from the main story or conflict. These characters are usually easy to bully and are the “class clown(s)” of the group. Like Sangenya’s character, her actions and expressions are always exaggerated except on the opposite side of the spectrum. Mika doesn’t take her job seriously as she’s constantly looking at makeup products at the company instead of making client appointments. She also enjoys getting involved in company gossip. However, Sangenya’s arrival pushes Mika to her limits and forces her to overcome her incapabilities.

If you’re looking for a comedic business drama, I would recommend Ie Uru Onna. The cast is excellent, and the music is great. Though the changing team dynamic was what kept me watching rather than the episodic cases. It’s fun, lighthearted, and you will definitely get a laugh.

Played around with #blender to model a plate with cookies and placed it in a scene. I mean... It alright 😭
This feed is like a collection of my #arttraining now.
I didn't know what I was going for when I started this... but I knew I wanted a color palette inspired by IU's #strawberrymoon and this was what came out of it. It'll do, I guess.
This is my first completely original #mattepainting. It turned out better than I thought 😆
Bubble fun
Recreated a speed paint/tutorial by @halfmooneditz 💙 while Alice in Borderland played in the background. 😂
Loading Comments...
%d bloggers like this: